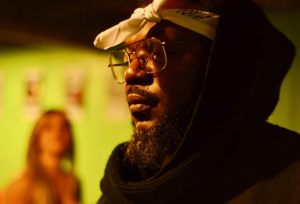 WE STRONGLY URGE everyone who wants to know what Spaide is up to in a timely fashion to add @SpaideRipper on Instagram and Twitter as well as search for Spaide across all social media platforms, we are sure you will find him.

We are back to here once again to update you guys on the progress of the most slept on underground Phenom to hit the sound waves since the emergence of rappers like DMX and Canibus. In that same vein of erratic genius that artists like Kanye West and Kendrick Lamar apply, we have the case of Spaide Ripper, the guy that waits in the shadows to take over the sound of hip-hop. Waiting his turn patiently while keeping us fiending for more of his unique swagger. Sounding like the biggest in the room all while remaining a mystery.

I wont hold you any longer, it has been too long since he talked with us. Here’s how it went when we spoke with him:

SRDotCom: Hey man we have to have a convo for your website, its been far too long since the last update.

SR: Yeah I know! I feel bad about it but I have to keep pushing forward! Let them know that I’ve been working stacking music for the next wave to ensue!

Will do. But lets go back a bit. What have you been up to since you came off tour? That’s where we left off at.

SR: Wow its been that long? Damn. Well I’ve been recording like crazy of course. The sound of music has changed since my last project. I’ve been refining the sound. A lot of people bite my stuff. They take little pieces of me man. I have to constantly evolve forward in order to have something unique of my own. I got so much to give you guys I may drop a free project just to hold things over. As well as structuring my business in a more profitable fashion coupled with the grind of personal life. I know its been a minute since my last offering, but its going to be worth the wait. One day it will all make sense. Anyone with their ear all the way to the ground knows that they can find my voice out there on new stuff. You just have to be aware!

Do you still perform? Have you done any show dates since the Snuff Reels tour?

SR: I still be on the road with Stevie Stone. I could pop up in any city on any one of his booked dates. We was in Colorado together in January back before the pandemic erupted. I was just in Shawnee , Kansas with him as a surprise guest. I’m all over his project! Make sure you guys go get Black Lion by Stevie Stone. I’m on four joints on there.

How was it working with Stevie again?

SR: All good! Just like old times. We friends in real life! Even if we never do another song that’s still my brother. It just so happens that we like to make music and it sounds good. I want the people to know that we still rocking out. We did a video to “No Permission” and a video to “Type of Time.” No Permission was on some movie shit!

We had a lot of fun with that joint man. “Type of Time” was some fly shit too. It’s a fun song, the type of song Stevie rocks on stage. Something to party to. I like to make the room light up when my voice comes on. That’s one of those songs made to get you moving !

Was that the same mentality going into “Holiday” or did you take a different approach? What was it like working with Maez301?

SR: It was cool. I still haven’t met Maez face to face. Stone sends me these records with no words on them. Just the empty beat and then I sculpt what the song is going to be about. After I do what I want on the beat I send it back to him so all he has to do is his verse.

“Conquer” might have been verse of the year! You really went crazy on that one.

SR: Thanks. I did that verse just to make the Nay Sayers put respect on my name. People think I cant rhyme better think again! I got too much to say. I’m the most versatile rapper to ever do it! Tech N9ne called me all the way from Germany just to let me know I killed that song! I couldn’t believe it man! He was so hyped. That made it all worth it I swear. Spaide Ripper is a Midwest Chopper; I should’ve been on that song. I can spit with whoever! I’m one of the best from a talent perspective.

This thing is not easy! Its a priceless feeling to get recognized by Tech, one of the best to ever do it. Especially from my state. Its hard funding this dream; I’m not rich yet! So that phone call from Germany gave me fuel and motivation to keep pushing forward! I accept donations (https://cash.app/$SpaideRipper) and I humbly encourage anyone who believes in me to donate to help pay for studio sessions and etc. I thank all my true supporters. I’m still independent and could use all the help I can get! I’m also looking for people to add to my team and infrastructure. Tech told me to keep going so I’m going to continue on!

Will we ever get that coveted Tech N9ne and Spaide Ripper collab?

Yes! I hope so man. we definitely discussed it on the phone call from Germany. I saw him at the video shoot for “Type of Time” and we discussed it again. I don’t know what the hold up is because I know he wants to do it. I think the fans should remind him! I’ll see him soon. I got some things going on I cant give away. Some sponsorships coming and things of that nature. I’m definitely going to see Tech soon. Its destiny. I got the type of career where I cant tell everything that’s going on, I work hard behind the scenes as well. Some things wont get talked about until my autobiography!

Stream “When We Were Young” by Spaide Ripper by clicking the image below!